This Saturday, we’ll be heading to my parents house to celebrate the Lunar New Year. Lunar New Year always held a special place in my heart as a kid. After all, what kid doesn’t like getting red envelopes filled with money for the new year? I remember we’d attend these huge New Year parties at our relatives’ homes and we’d just get so many envelopes. CJ is only three but we’ve kept his li xi (lucky money) in his piggy bank for him. I don’t even know how much money is in there, but I plan it keep all his li xi in there until he’s old enough to understand the concept of money and counting dollars. 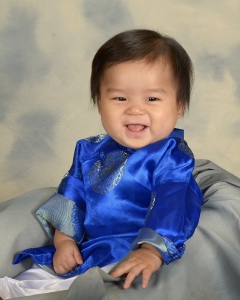 Here’s his class photo from a couple years ago. Doesn’t he look regal in his traditional clothes? One of the things we did as kids was wear traditional Ao Dais for new year. I’m sure all of your reading this probably did as well. I struggle with that idea now. In my extended family, no one really does that anymore. Do I make CJ put on an ao dai when no one else wears one?  Should I wear one too so he sees that it is normal? I don’t want him to think it’s just some sort of novelty  but at the same time, no one even wears ao dais in Vietnam, so does it really matter? I don’t know. In my local Vietnamese moms Facebook group, I noticed several moms asking where to buy kids’ ao dais and several other moms selling them.  When I see these posts, it makes me wonder, “maybe just this year…” He did look SO cute wearing one.

What do some of you think? Do you make your kids dress up for the new year?  Why or why not?